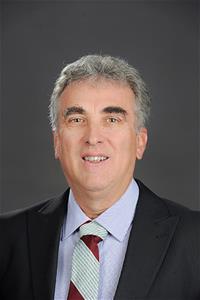 Mark Humbert was elected to council in December 2013 and is currently serving his second term. Humbert was 8 years old when he developed two lifelong interests (other than sports): news reporting and government. He began covering city government as a paid journalist at age 16 and during Youth Government Day, actually reported on a council meeting during which he shadowed a council member. He studied political science in college and edited the newspaper and a section of the yearbook. He’d already given up his other dream of being the shortstop for the Chicago White Sox.

During his 45-plus-year newspaper career he covered city governments in three states.

In 2001, he and his wife, Allison, moved to Brighton, choosing it over Denver, where both of them worked (Mark at the Rocky Mountain News). They both found Brighton to be a great city, with helpful, friendly, welcoming people.

He and Allison have operated the Daily Post since 2006 and previously operated Local Color Magazine and the Banner.

Through their publications, the two have: provided scholarships for graduating 27J high school seniors; helped originate and participated in all Help for Homes painting weekends; developed an early blueprint for what is now Market Day; helped transition the Performing Arts Council of Brighton into heART of Brighton, fundraising arm for the Armory; and supported several Brighton nonprofits and organizations.

For the past year, Humbert pursued his interest in helping downtown Brighton by seeking and obtaining an appointment to the Brighton Urban Renewal Authority. Then, in late August, decided to further serve the community as a member of the City Council.